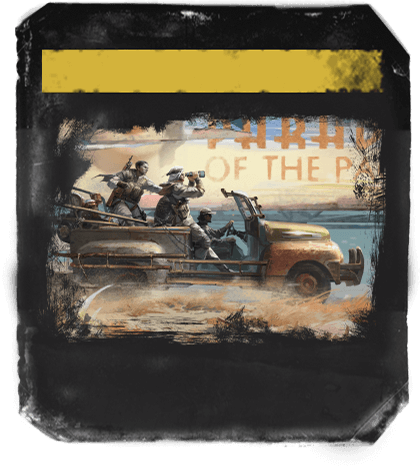 Wintery greetings to the Aftermath community! It’s time for a brand new update with Vehicles, massive improvements to Trade, new content and a lot more!

Your wishes have been heard; vehicles are here! This means that tough Specialists no longer have to use their scrawny legs to move around! Abandoned but more or less working cars can now be found randomly while scouting sectors and brought back home for repairs at the new Garage building. Once fixed, they’ll provide a big boost to your Specialists’ speed across the map. To balance this increased movement, Specialist Action Points have been scaled back slightly. There are three types of vehicles – some are faster while others provide passenger seats to enable several Specialists to travel together. Vehicles and their repairs also tie in to the new resource type “Fuel”, which you can scavenge, trade or make yourself at the new Refinery building. This is the very first and still incomplete version of vehicles, so improvements (like what we’ve done with Trading) will follow soon.

The first version of Trading has seen a lot of use and understandably led to some confusion, as it was basically “free”. Trade-in our version of the post-apocalypse works more like favors between societies with friendly neighbours helping each other out. They now demand and reward players with Reputation, which acts as a currency of sorts between you and that particular Society. For example: if your Reputation with Trinity is low, send them resources to get it back up. You can then “spend” that Reputation later to ask them for a favor (like Medicine). The Trade interface has gotten a facelift as well, with more clearly presented trade information. Seeds and Insect Eggs are now tradable with each Society having their own specific type to trade. You can, therefore, find those Cabbage or Soybean seeds easier to boost your Food production or acquire seeds for the new inedible crops without relying on just random encounters.

Our programmer, Lasse (not to be confused with our game director Lasse) is the main guy actually implementing all of these trading improvements. Using the first iteration as a reference – along with new specs from game designers – he created a more complete data structure for the new features. A barebones prototype UI was then put together with all the necessary data fields to start testing the functionality. Up until this point, his work was pretty independent barring comments from the design team. Once everything in the list of improvements was more or less done, the development of a revamped Trade UI went underway. At this point, Lasse’s work consists of mostly small tweaks and bug fixes. When this new version of Trading was complete, it was merged with the stable development build ready for final QA tests. One programming challenge was to leave this new version of Trading open enough. This way we can reuse most of the code in future development.

Not all grown crops end up in your colonists’ stomachs. Harvested Sunflowers produce Oil required at the Refinery for creating Fuel for the vehicles. Fuel is also a highly requested trading commodity, so stocking up on it might be a good idea. Harvesting Flax, on the other hand, provides you with an alternative source of Fiber, so you don’t have to rely so heavily on Recyclers to produce clothing. As both crops are grown in the same fields as Food, players should have an interesting balancing act in considering what to plant next.

Streamers and their audience are also getting something in the form of our first set of Twitch-integrated features! You can now cast a vote on two things affecting the game: event outcomes and which Catastrophe will hit the colony next. Depending on the chat’s mood, this can make the game easier or a LOT harder. Twitch features can be enabled from the Settings.

New quality-of-life improvements include highlighting colonists living or working in the selected building to track them down faster. Crops that are still growing are now separated from the total Food, so you can see how much you’re about to get versus how much you have got. Almost broken Tools and Clothing have also been added to the top resource tooltips as requested by the community. New content has also been added in the form of ten new Events, new event illustrations and improved Specialist models unique for each archetype from Fighters to Scavengers.

And that’s it for this time! We hope you’ll like the new features, content and improvements, and that you will continue to send us feedback about them over the course of the Early Access period!