We’re approaching a major milestone in more than one way. A full year of Early Access development is now approaching and the game has gone through a lot since the time we first presented it at PDXCon in 2019. While the monthly update schedule has kept us very busy (without going into a crunch mode), we believe it was worth it. The community feedback has been essential in steering the game’s direction the right way and how we’ve prioritized some new features over others. The tight development cycles may have caused some delays with the finalization of certain features, but the game really is in a better place because of it. This newest update is a good example of how our own internal plans mesh together with your comments and suggestions.

First of all we’re adding Quests! They’ll take place on the World Map and task you to search for key locations around the world and make sometimes tough choices on how to deal with various encounters and people you meet. Secondly, the World Map is starting to get some love it deserves. We’re not stopping here, but this’ll be the initial step towards a more streamlined and enjoyable exploration experience. Other major additions include a more robust overlay system, improved tech tree visuals and info contents and the long-awaited Steam release! 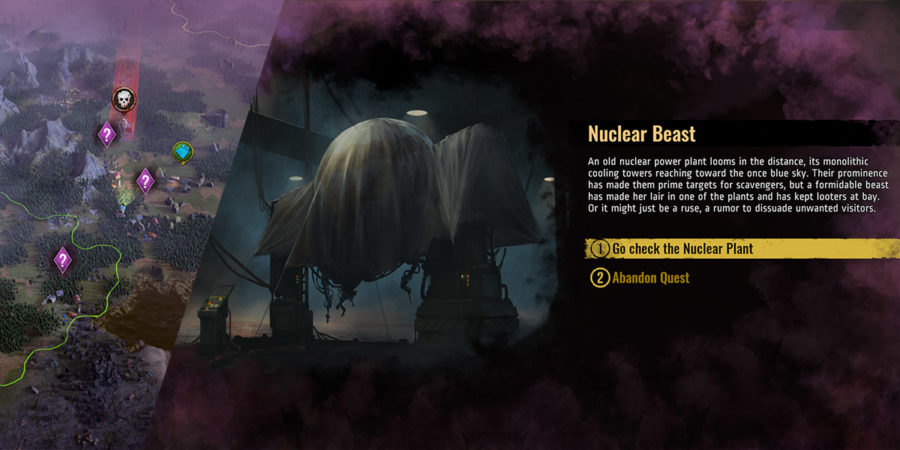 Unlike Events, which happen inside the colony, Quests task your Specialists to search for lost people, scavenge dangerous locations, and encounter a motley bunch of wasteland inhabitants on the World Map. In these multiphase adventures you’ll be making important decisions on how to handle each task and be rewarded handsomely as a result. These side quests will only pop up from time to time, so be sure to embark on one when you get the chance. This is our first version of the system and it’ll be expanded with more combat, society elements and other features in the future updates. It will also serve as a base for our eventual main quests. 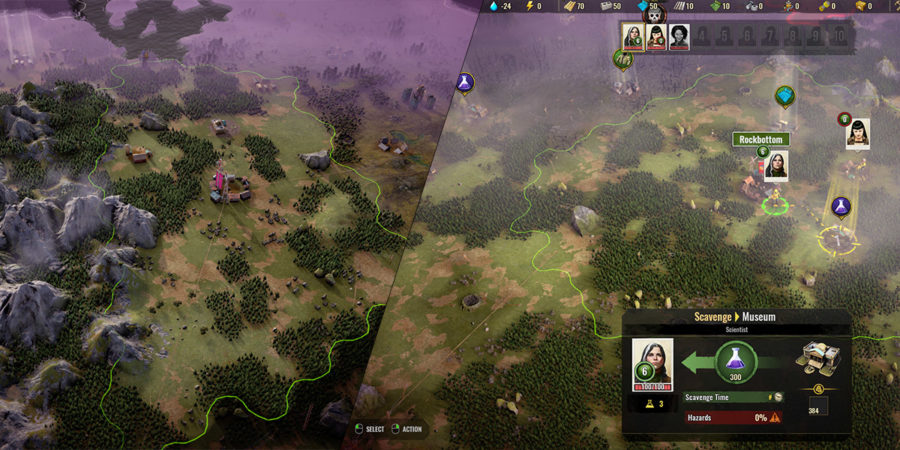 With the first world map improvements we wanted to achieve several different goals, many of which you, the community, have voiced your opinions about. The new map is more fluid to interact with, thanks to larger sectors (less time spent scouting). Instead of taking the whole turn, attacking, scouting and scavenging will now use a set number of Action Points. You can also leave your Specialists to scavenge locations without you telling them to do so every single cycle. Combat and its UI have also been refined to be clearer on how they work. Specialist and bandit stats have been harmonized to better illustrate this change, and each side has a chance to score big critical hits (or misses).

We got a special guest in the developer interview section as Tapani is both our Technical Director and a founding member of the Iceflake Studios!

Like many others, I started game development with modding and hobby projects in the early 2000s, as official studies didn’t really exist. Already back then, we worked together with Lasse (our Game Director and the other founding member) on those projects. This eventually led to the forming of Iceflake Studios and to where we are now. In the beginning, we even worked on our own 3D engine technology, as ready-made solutions weren’t really a thing yet – something that was very different from today.

As a Technical Director I’m responsible for managing our programmers and making sure that we use the optimal technical solutions for the projects, and in the long term for the company as a whole. Earlier my role involved more actual programming, but as the projects and the team has grown, the needs have turned towards handling the big picture, setting guidelines and making tech-related decisions to keep projects on schedule and within budget. During the development, we often face game design-related challenges as well, where it’s critical to try and find a workaround to implementing a tricky feature on time and to not cut it down so much that it loses what makes it fun.

Unity as a platform has worked well for us. While you don’t have the control of a self-developed engine, it’s much easier and quicker to get results instead of essentially having two development projects going on in parallel (both the game AND the engine). And once you get familiar with the libraries and the process in general, it’s often easy to take those teachings into future projects, like how the UI should be constructed, for example. With experience, you learn to create smooth development processes, handle more people and how to recruit the right people and guide them in.

A game like Surviving the Aftermath is something I’ve always wanted to develop, especially now that we can develop it together with the talented people at Paradox. The project is bigger than we’ve done before, but even the early ideas and prototypes felt good. It has since grown from tighter scenario-based gameplay to a larger and randomly generated one and runs on multiple platforms instead of just PC. The rapid update cycle with tight deadlines has been a challenge, but I believe the end-result will be worth it. Player feedback has been important for us in figuring out some of the rare bugs and steering us into correct direction with the game itself. And we’re not done yet, so things will only get better. 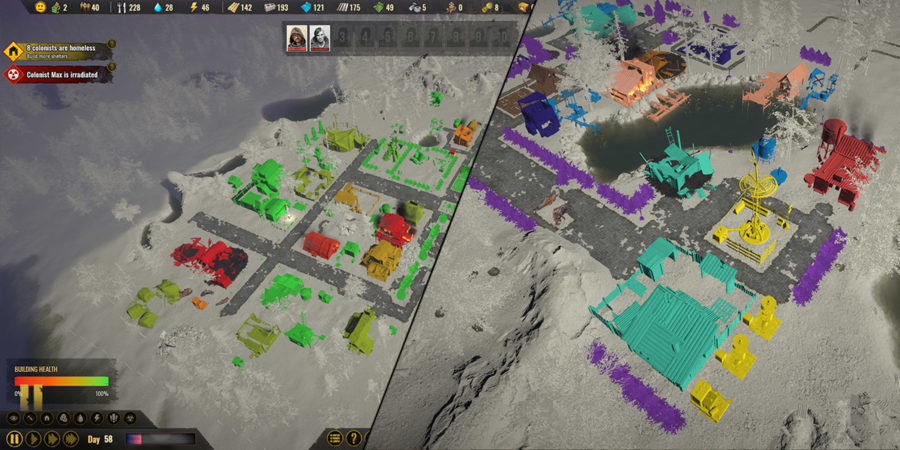 In the UI department, we’ve added a new Overlay mode and improved the Tech Tree once again. Overlays include handy tools to identify resource deposits, damaged buildings, water production and more by enabling them from the bottom menu. Tech Tree is now both better-looking, but also restructured to be more informative with its new tech and building preview options, which will help you to make a more informed decision on what to spend your Science Points on. Colonist and Specialist info panels have been reworked to bring you more information on how your individual survivors are doing and what’s ailing them. 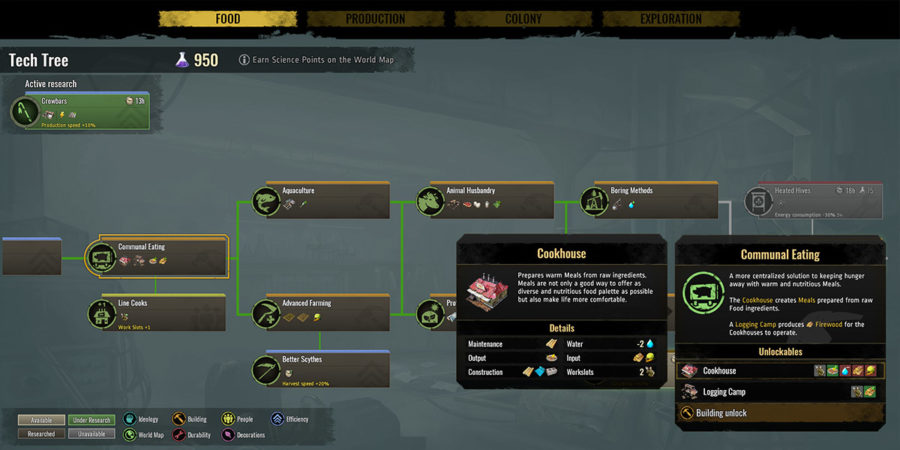 A final major addition in this patch is that Surviving the Aftermath is coming to Steam! As requested by many, this is the first version of the game on Valve’s platform in Early Access. It’ll also include 30 Steam Achievements and a new colony flag for the early birds who want to dive in right now. Epic Store is also getting its own flag symbol and all platforms include a new starting Specialist called the Baron to celebrate our one year anniversary in Early Access!

There are also hundreds of smaller tweaks and improvements everywhere from visuals to survivors, trading and more. Check the full patch notes for detailed information. We hope you enjoy the Quests, the improved World Map and everything else in this update! Stay safe and play games!