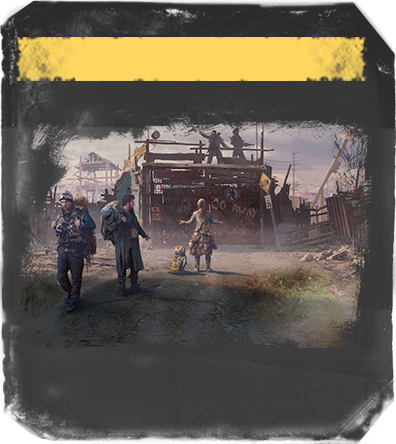 We’re back aboard the update train after the PDXCON Remixed and the silver update “Trailblazers”. We have bigger new things brewing in the background, but in this update we want to focus on improving the existing features. As an example, these improvements include giving more accurate information in building info panels, world map bandit combat, combat balance changes in the colony, and a new, more proactive way of acquiring specialists. But let’s start by taking a look at the new colony alarm system.

The new “Alarm” feature sends out a colony-wide call for all your colonists to take shelter inside their homes. You can enable this straight from the main UI next to the game speed settings. Colonists will stop what they’re doing and immediately run inside to take cover from catastrophes or approaching enemies. Medics are the only workers who’ll remain at their workplace. Guards and Specialists stay outside and react to hostiles on a much larger area. Be careful when sounding the alarm, though, as colonists will suffer a major happiness penalty and can’t take care of their basic needs like eating or treating conditions while confined to their homes. Our longer-term plan is to improve the colony combat in various ways, so hopefully, this will aid in surviving all the upcoming challenges we have in mind. 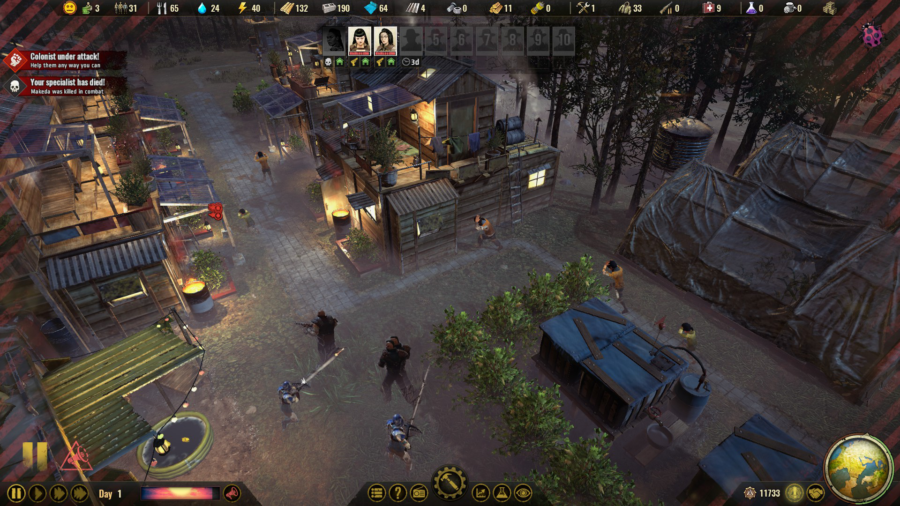 The second part of colony combat changes affects the balance and aims to make the feature more impactful and an integral part of surviving the hostile wasteland. We are rebalancing the combat speed in the colony to give more time to react to threats and make more decisions during the combat. Previously fights ended before you even got there, and we wanted to change that. To achieve this individual colonists are less effective against enemies, but guards and specialists are deadlier than before. Hostile unit damage and health values have been adjusted accordingly and there are more encounters with hostiles than before. There’s also one new enemy unit variant amongst other tweaks, but we’ll leave that for you to discover. 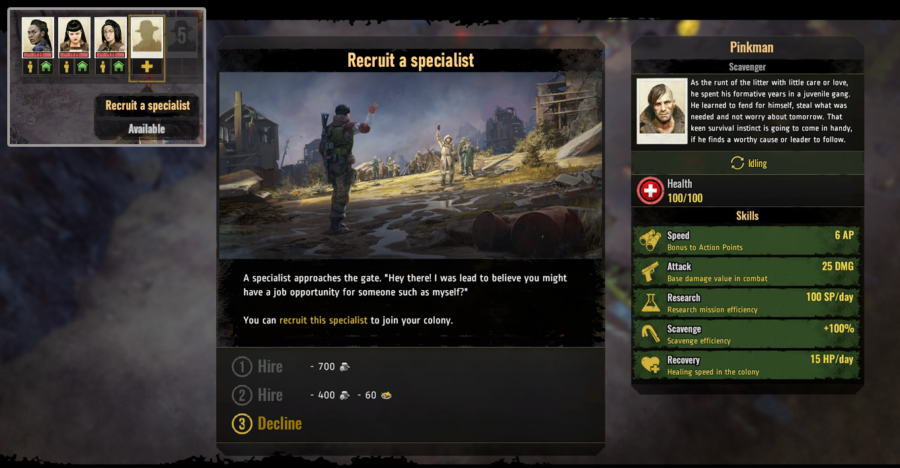 We admit that acquiring new specialists has been challenging and hard to predict. Adding more outposts and emphasis on the world map also requires more specialists, so this part will be expanded further in the future. But we wanted to acknowledge this change already with this small addition which hopefully gives more control over acquiring new specialists instead of just waiting for survivor groups. The new recruit feature in the specialist menu on the top of the screen allows you to send a word out that you’re looking for a specialist. This triggers an event where a random specialist appears at the gate and offers their services in exchange for silver. Whether you want them or not, you must then wait for a few days before trying again. 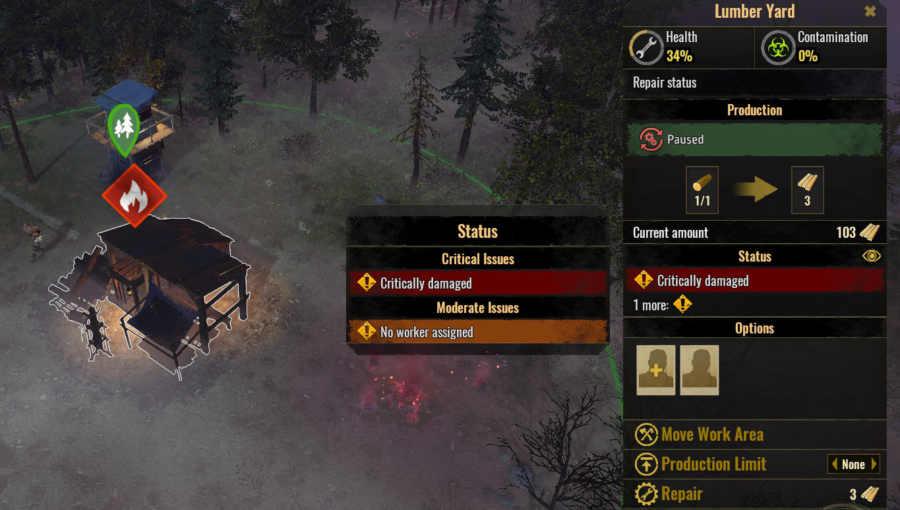 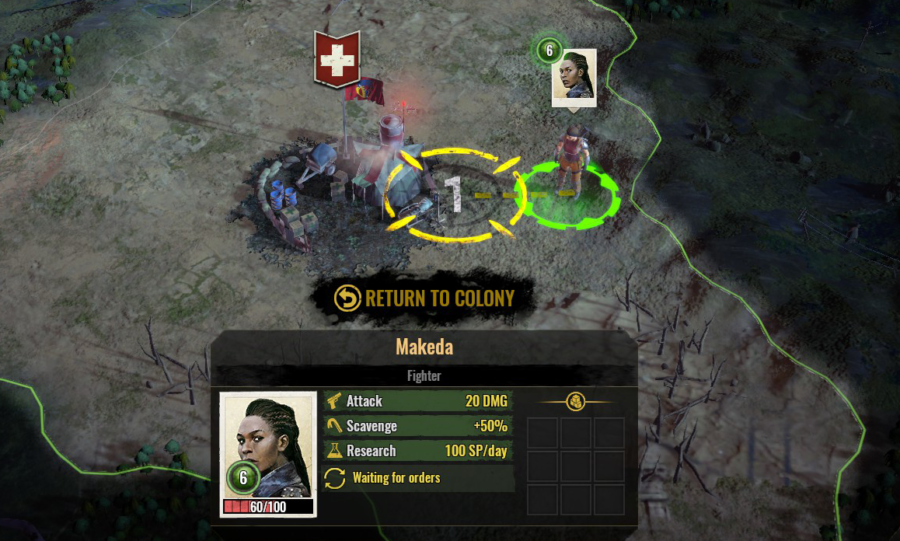 The outpost system from the previous update is expanded further with something the community has requested for a long time: a Medical Outpost. Once built on the world map by a settler, it allows one specialist to patch themselves up without having to return to the colony. Specialists can finally spend their entire time exploring the map fighting bandits and scavenging resources without necessarily setting foot in the colony, which is the direction we had in mind for them. 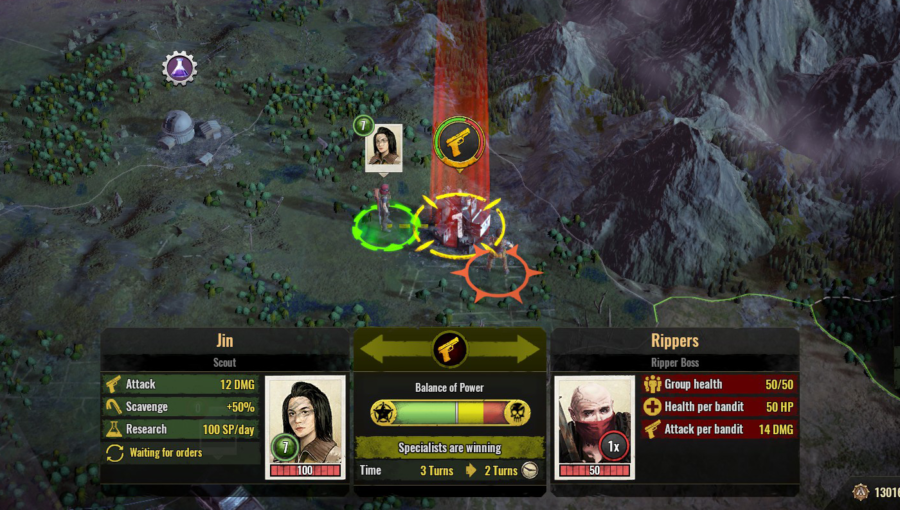 Several user interface updates have been added to the world map for a smoother user experience. The balance of power indicator has been added on the floater, so you can see how the fights are going while navigating on the world map. We’ve removed unnecessary clutter from the battle UI and added small touches like the verbal balance of power status and bandit group types to help you assess the threat better. A new context-sensitive command menu collects all the actions together in one place.

We’ll come back with new additions after July. Hopefully, you enjoy this Control Update and have a wonderful and safe summer! Take care of yourselves and play games!

You can check the full changelog here.